“Ordinarily I wouldn’t question others’ parenting choices. But the problem is literally one of live or don’t live. While that parent chose not to vaccinate her child for what she likely considers well-founded reasons, she is putting other children at risk. In this instance, the child at risk was my son. He has leukemia.

What does any of this have to do with vaccinations? While the purpose of chemotherapy is to kill the cancer, it also kills the good cells—most notably the infection-fighting white blood cells. That means my son has limited ability to fight off anything. A single unimmunized child in an ordinary child care setting is the equivalent of a toddler time bomb to him.
[…]
Those who cannot be vaccinated, including young babies, transplant, and cancer patients, depend on the immunity of the herd to protect them. In recent years, in communities where many parents opt out of vaccinating their children, the herd has diminished. As a result, unvaccinated children have died from totally preventable infectious diseases such as measles, meningitis, and pertussis.
In 2008 in San Diego, a 7-year-old boy whose parents refused vaccines contracted measles while on a family trip to Switzerland. Before realizing how sick he was, the boy went to school and infected four other kids at school, after having already infected his two siblings. He then infected four other children who happened to be in the waiting room at his pediatrician’s office. Three of those children were too young to have received their MMR vaccines. One of those infants was hospitalized; another traveled on an airplane while infectious. This case is a sobering example of how one family’s decision not to vaccinate their children has serious consequences for other children.
[…]
Because we want him to have as “normal” a life as possible, we’ll likely send him off in the bright yellow school bus and cross our fingers that the kid sitting next to him didn’t just attend a “chicken pox party” over the weekend. Because what’s “just a case of chicken pox” for that kid could be a matter of life or death for mine.”
.
Roubado à Luna, vindo do A pox for you. Porque não acreditar nas vacinas tem consequências reais, a curto ou a longo prazo, e que não afectam só o indivíduo não vacinado. Afectam toda uma comunidade, imunocompetente ou deprimida. Cria reservatórios de patogénios, com portadores sintomáticos ou não, que podem não ser detectados e pôr em risco muitas outras pessoas. É irresponsável e, em determinadas circunstâncias, criminoso. E, infelizmente, parece ser um problema cada vez mais grave, com adesão crescente.
Deixe um comentário
cabeça gorda 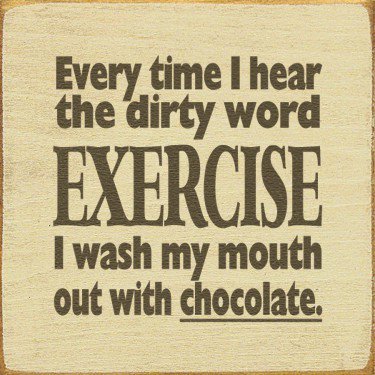 Exercising and exorcising: two words so similar it can’t be a coincidence.